We've been in the west of Ireland for the last few days and managed to spend some time at the beach. The plan was to do some rock pooling and beach combing, but the first day we got too distracted by the huge waves. It was relatively calm on the beach, but there were massive waves breaking just out to sea, so our rock pooling turned into wave racing. 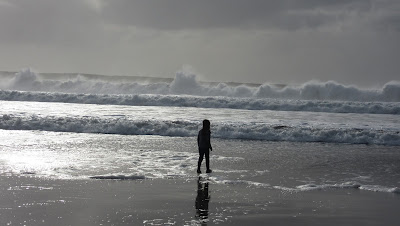 That part of the coast is called the Wild Atlantic Way and it certainly lived up to its name! 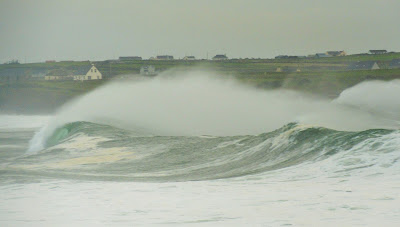 Even the oystercatchers were racing the waves with us, although they eventually saw sense and moved up to the top of the cliff. 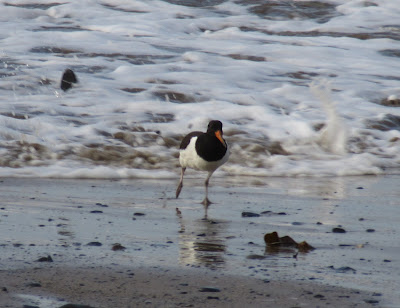 The rock pipits couldn't care less and hopped from rock to rock on the beach.
The second day the waves had died down, but it was blowing a gale on the beach. Undeterred we set about some rock pooling and beach combing at Lahinch and I joked with Bug Mad Girl that she might find a whale washed up after all that rough weather. She came pretty close and found a large vertebrae which I think must have come from a whale! 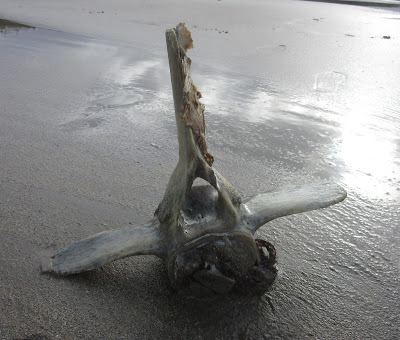 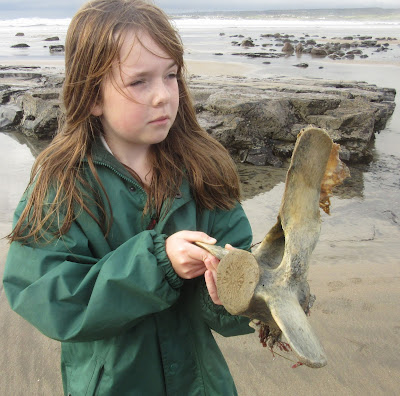 She was very excited to find it and was determined to bring it home with her. She said it'll make an awesome show and tell at school ... when the teacher asks what she did over half term she can whip that out of her school bag! We'll have to try and work out what it came from when we get home.

Lahinch is in the Burren, so the beach has an area of typical Burren limestone pavement on it, making it great for rock pooling. We found all sorts of great things including anemones, mermaid's purses and a hermit crab in a periwinkle shell.


It goes without saying that BMG got completely soaked, even though she was wearing wellies. It just wouldn't be rock pooling if your wellies weren't full of water! 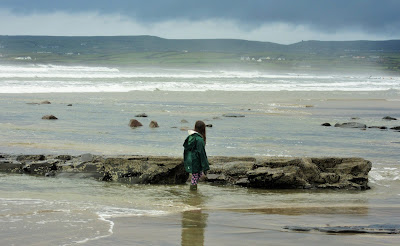 We weren't alone on the beach as there were lots of little turnstones all around us. They're so well camouflaged that you could easily miss them though.

Less easy to miss was the pair of curlews with their amazing beaks!

We had a scream at Lahinch beach! 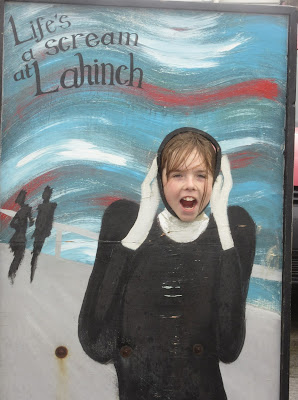 It's half term and the forecast last night was dry and warm, so we decided to put the moth trap out for one last time this year. There are still a few moths flying at this time of year, although most are long gone. You never know though, something interesting might just fly past our garden and be attracted to the light ...

We opened the trap this morning, lifting the lid and not paying much attention to the moth sat on top of it. We left it there and, full of anticipation, dived into the egg boxes inside. I have to say it was slightly disappointing as the only moth we found inside was a very worn little brown one. I'm not sure, but it could be a chestnut, which would be flying at this time of year. 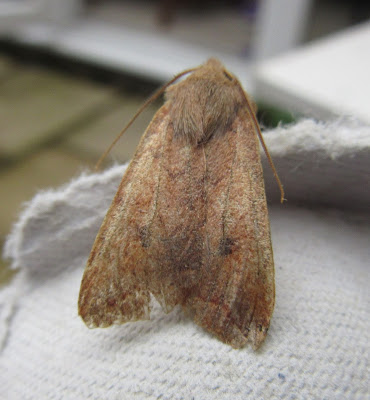 We also caught a wonderful looking ichneumon wasp and something that looks like a cross between a crane fly and a mosquito, which I think is called a winter gnat. Both have really long legs and antennae and are interesting looking beasties.

We packed away the egg boxes and put the top on the trap, then remembered the moth sat on the lid. I could tell from the shape of the wings it was from the 'carpet' family, so looked through the seven pages of 'carpets' in the field guide and decided it looked like a Juniper Carpet. It seems they're fairly scarce, so I checked with our county moth recorder. He agrees with the id, saying only 8 have been recorded in Bucks since 2000 (although that may be because most people stop using their moth traps in their gardens in October). Quite an exciting find! 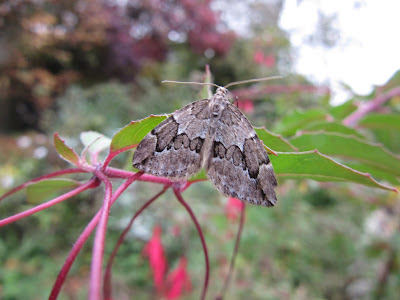 Today was such a beautiful day! The sun was shining, picking up the beautiful colours in the autumn leaves and casting long shadows through the trees. It was the sort of day that makes you love this time of year and be so grateful to live somewhere as wonderful as the Chilterns.

I've walked this route a million times with the dog, but the colours and sunlight felt very special today... 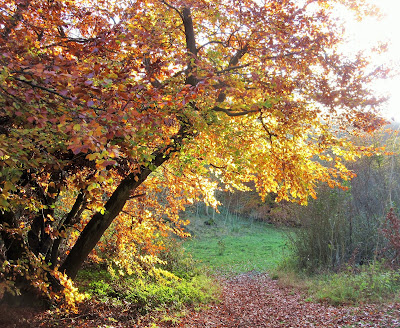 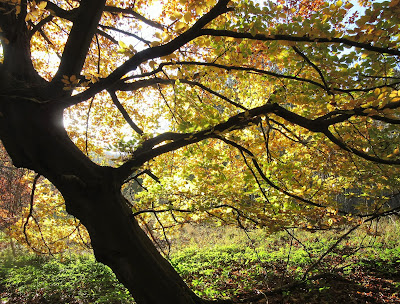 So much more than a toadstool

One of my favourite things about fungi is that you just never know what could be hiding behind the next tree or lurking in the camouflage of the fallen leaves. While it's undoubtedly exciting to find a red spotted fly agaric, a massive parasol or a troop of clouded funnels, there's so much more to the world of fungi than the traditional toadstool. Trumpets, corals, clubs and even a tiny saddle are just a few of my more unusual discoveries from this week...

I've been back to see the fabulous black trumpets called Horn of Plenty that I originally found last week. They're still going strong and lots more have appeared in the last week. They're particularly hard to spot as they blend in so well with the leaves and look almost like black holes in the ground from a distance.


Whilst I was crawling around on my hands and knees trying to get some photos, I noticed these tiny little trumpet chanterelles. They have brown trumpet shaped caps and distorted yellow stems. They're supposedly just as edible as the normal chanterelles, but I would rather see them in the woods than in a risotto!

This strange looking fungus is called an elfin saddle. It has a thick stem and black or grey distorted cap that forms a saddle shape (well sort of!). These were hiding in a small patch behind a fallen tree.


Coral fungus is beautiful and such a surprising thing to find. It really does look like coral, but it's in the woods instead of under the sea! This one is called crested coral.

Very similar to the crested coral, the wrinkled club is in the same family, but is much less branching and has blunt or flattened tips.
Yellow stagshorn and small stagshorn are bright yellow, rubbery antlers that grow out of dead wood.


Candlesnuff fungus is very common and found all year on dead wood. It gets its name from its resemblance to a burnt candlewick, with a black base and white powdery tip.
Finally, I believe this white fuzz is a type of slime mould called ceratiomyxa fruticulosa, or coral slime. If you look closely it's made up of white tubes in a star or rosette. From a distance it appeared to be almost blue. 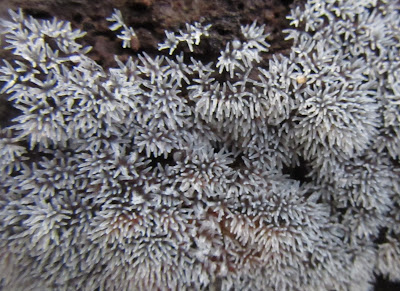 Chinnor and Princes Risborough Railway, known in our family as the Chinnor Chuffer, is a local railway that has a mixture of steam and diesel trains running on weekends and special occasions. It's run by a group of very keen volunteers who maintain the trains, track and station and all seem to have a lovely time playing trains! It originally ran as a passenger service between 1872 and 1857, at which point it was closed to the public and used solely to transport goods to the cement works in Chinnor. British Rail closed the line in 1990, handing it over to the Chinnor and Princes Risborough Railway.

Today was Apple Day, so we decided to take a ride on the chuffer and find out a bit more about our local apples. The Mid Shires Orchard Group were on hand with a display of apples, including several found along the line, and to let us have a go at pressing some juice. 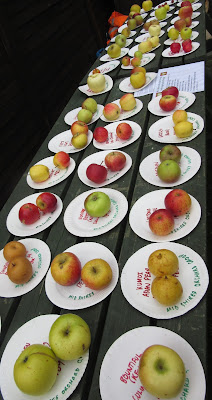 We jumped on the train and trundled off down the line (for 3 or 4 miles) while a guide pointed out interesting apple facts. The railway runs along the bottom of the Chilterns where the chalk escarpment meets the clay of the Aylesbury Vale. This unique geology provides soil that the fruit trees thrive in, making the railway line apple trees particularly bountiful. Although this year all of the apples are about four weeks behind where they should be at this time of year because of the bad summer we've had.
We saw apple trees that were planted in 1880, making them over 130 years old. The cottages are long gone, but the orchard still exists and the trees are doing well. Grafts have been taken from them to preserve them in case the trees are blown down in a storm or become diseased.

There were other fruits growing along the line, including bullace (a type of wild plum), sloes, rosehips and a large quince tree.


The view of the Chilterns was wonderful and we could really see the leaves starting to turn. We passed below an open area of Chinnor Hill called The Plain that we had been stood on a month ago looking down on the train below. You can see that here.
On an earlier train journey they had seen deer in the fields, but we didn't see any this time, making do with red kites instead.
Back at the station the kids helped to make some apple juice.

The apple peeler was quite a big hit too. It was quite clever!


We had a lovely time and headed home with plenty of apple pie and juice to enjoy.
Posted by Bug Mad Girl at 19:00 No comments: 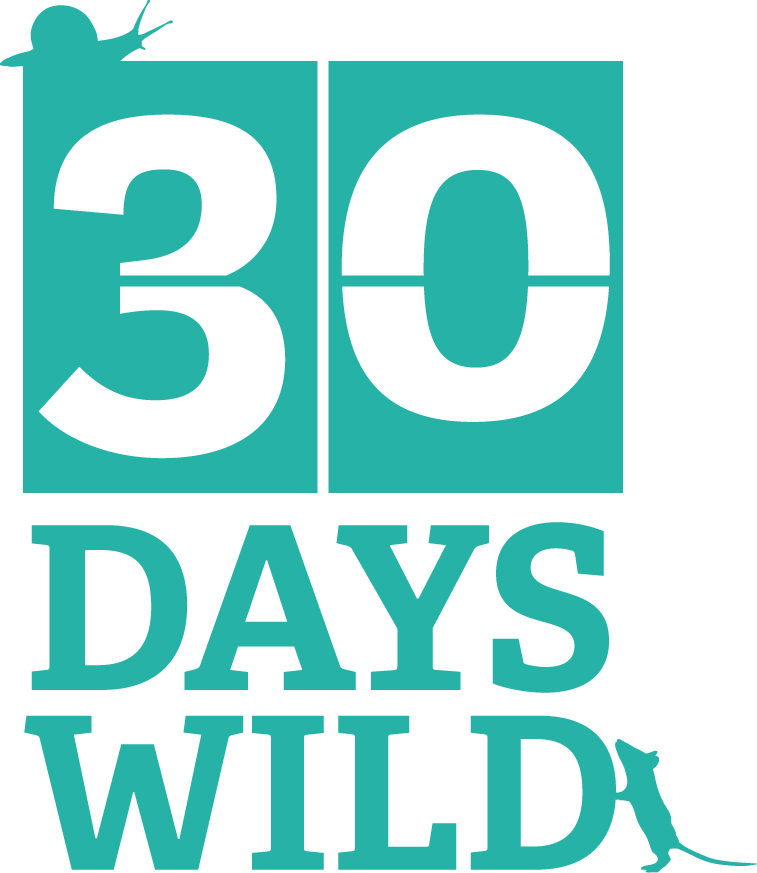